It is narrated that a miracle occurred before his birth proving his Saintship. One day, during the pregnancy of his mother, she wanted to pluck some plums from her neighbour’s tree although she had not obtained permission. The child in her womb (Hazrat Baba Fareed) created a severe pain in her stomach and forced her to abandon the idea of plucking, stopping her from acting unlawfully. After a few years after Hadrat Baba Fareed’s

birth, his mother lovingly expressed: “My dear son, during your confinement, I never ate anything which was unlawful.” Hazrat Baba Fareed

, however, smiled and said, “But, my dear mother, you wanted to pluck some plums from our neighbour’s tree without his permission, and I had created a severe pain in your stomach which saved you from this unlawful act.”

After he had completed his early religious education at the age of 7 in Khotwal, his mother for higher education sent him to Multan. Here, he stayed in a masjid where he learnt the Holy Quran by heart and studied Hadith, Fiqh, Philosophy and Logic under the tutorship of Moulana Minhajuddin.

During his studies, Hazrat Khwaja Qutbuddin

became his mureed (disciple) in the Chistiya Silsila. Upon the instructions of his Peer-o-Murshid, he undertook a tour of Islamic countries, for about 18 years from 593 A.H. to 611 A.H. He travelled to Ghazni, Baghdad Sharif, Jerusalem, Afghanistan, Syria, Iran, Mecca and Medina meeting many great saints and Sufis. After the demise of Hazrat Khwaja Qutbuddin

nominated him to be his Khalifa or spiritual successor.

It is narrated that when Hadrat Baba Fareed

visited Madinah Sharif he was spiritually commanded by the Holy Prophet

. He was to receive some sacred relics from him. Accordingly, when he reached Baghdad Sharif, he received a box from Hadrat Abdul Wahab

which contained the folowing holy relics: Two flag-poles which were used by the Holy Prophet

in some of the battles fought by him; one wooden bowl in which Huzoor

used to eat; one pair of scissors and one Turban which was used by the Holy Prophet

Because of political upheavals in Delhi, he was obliged to shift the centre of the Chistiya mission from Delhi to Ajodhan now known as “Paak Patan”. The Khanqah of Baba Fareed

, with his patronage, became a great university of Moral and Spiritual Training. Thousands of aspirants, scholars, dervishes and Sufis reaped benefit from this spiritual university. Hadrat Baba Fareed

reached the pinnacle of spiritual glory through extremely hard Mujahedas (spiritual striving) to gain mastery over the Nafs.

to perform the Chilla-e-Makoos for 40 days. This chilla was seldom undertaken by Sufis and was one of the most difficult tests of Hadrat Khwaja Baba Fareed’s

faith and courage. It was to be performed in a well by hanging himself in a reverse or headlong position with his feet tied up by a rope to a sturdy branch of a treetop.

Once, due to weakness, Hadrat Baba Fareed

helped himself to walk with the aid of a staff. But after a few steps, the colour of his face suddenly became purple, as if he was under heavy punishment and so he threw away the staff. When Hadrat Khwaja Nizamuddin

, who was escorting him, enquired the reason for this, Hadrat Baba Fareed

replied, “I wanted to take help of the staff, but Allah’s displeasure frowned upon me for depending on other’s help instead of His. I, therefore, threw away the staff and felt highly ashamed of this weakness in my faith in Allah, the Almighty.”

It is also narrated that once a trader was taking a caravan of camels laden with sugar from Multan to Delhi. When he was passing through Ajodhan (now Pakistan), Hadrat Baba Fareed-uddin

enquired casually as to what he was carrying on his camels. The trader sarcastically replied, “It is salt.”
Hadrat Baba Fareed

also affirmed, “Yes, it may be salt.” When the trader reached Delhi, he was awfully perturbed to find that all his bags of sugar had turned to salt. He immediately returned to Ajodhan and apologised before Hadrat Baba Fareed

said: “If it is sugar then it shall be sugar.” The trader returned to Delhi and was pleased to find that the salt had turned back to sugar. This is how Hadrat Baba

One of the devotees of Hadrat Baba Fareed

, and also offered prayers seeking Allah’s help in their predicament. Suprisingly, the robbers threw away their arms and offered apology to the party and went away.

and said they were strangers to the land and that all their money was spent before the end of the journey. Hadrat Baba Fareed

gave them some dried dates which were lying in front of him at the moment and said, “Take them and go. Your journey shall be completed by the Grace of Allah.” Apparently, these persons were very disappointed with such a “cheap gift”. After leaving the Khanqah, they wanted to throw away the dates, but just as they were about to do so, to their amazement, the dates turned into gold. Regretting their miscalculations, these people left happily uttering their heartfelt gratitude and prayers for Hadrat Baba Fareed

He fasted throughout his life and maintained his nightly prayers and devotions. Fear of Allah always dominated him. He was a staunch devotee of Prophet Muhammad

immortal glory. At the mention of the Holy Prophet’s

character, he would often weep out of his love and devotion. Hadrat Baba Fareed

avoided the company of kings, government officials and the rich. He also warned his Khalifas, devotees and mureeds to avoid their company. He was a living picture of humility. Whatever he received was spent in the Name of Allah and his chest overwhelmed with mercy and forgiveness. Many miracles are attributed to him during his lifetime and after his passing away.

On the 5th of Muharram, during the Esha prayer while in the act of Sajdah, he uttered “Ya Hayyo Ya Qayyum” and with these words on his lips his soul disappeared into the Eternal Bliss of his Beloved Allah. Immediately a “Nida” or Divine Voice declared: “Dost ba Dost Pewast” – Friend has merged into the unity of Friend (Allah). 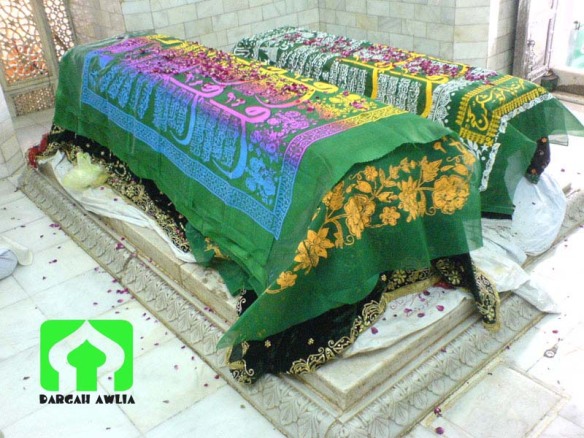 are among his favourite Mureeds and Khalifas. It is generally recognized that he had three wives and many children. Hadrat Baba Fareed

was indeed one of the most brilliant stars of the Chistiya Silsila and is held in high esteem by one and all.

was born on the 29th Shabaan in 569 A.H. in Khotwal, a village near Lahore. He was a direct descendant of Hazrat Umar Farooq

, the second Caliph of Islam.